Community of Democracies meets in Geneva 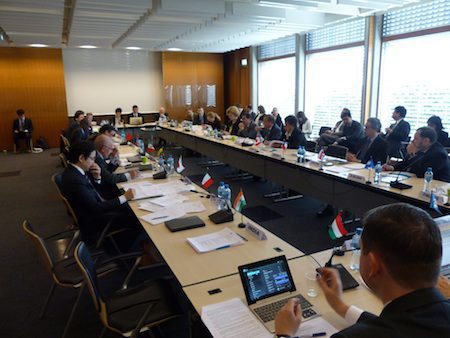 The Community of Democracies held a series of meetings in Geneva this week, including meetings of the Community's Governing Council, Executive Committee, and Working Groups.

The week of events began with a first stake-holders meeting for the Working Group on Freedom of Expression. The Working Group is currently in developing process, and is expected to be co-chaired by the United States and Uruguay, who led the preparatory meeting at the U.S. Embassy in Genva. This meeting was followed by meetings of the Working Group on Enabling and Protecting Civil Society and the Working Group on CD Governance, which discussed, among others, a new initiative for regional consultations with civil society – the first one to take place in April in Mali.

Following was a special side-event titled "Civil society space, government and the law", organized by the Working Group on Enabling and Protecting Civil Society, which presented several study cases on implementing a legal framework to enable civil society.

On March 12, the  Governing Council of the Community of Democracies convened. In the meeting, the new member of the Council, Guatemala, was greeted, and so was Moldova, for its graduation from the Democracy Partnership Challenge Task Force. Ambassador of Guatemala to Switzerland, Francisco Villagran de Leon, addressed the Council's members on the occasion of the first participation of Guatemala in the Council's meeting:

Guatemala values this forum and recognizes its importance and contributions to the development and consolidation of democratic governance on the basis of the strong relationship between the principles of democracy and human rights. Guatemala wishes to take this opportunity to express its commitment and its availibility to support the work of this Council, which without doubt contributes to maintaining peace and international security and to the realization of the principles contained in the United Nations Charter.

Later on, participants of the meeting spoke with United Nations Special Rapporteurs on the Situation of Human Rights Defenders, Ms. Margaret Sekaggya, and on the Rights to Freedom of Peaceful Assembly and of Association, Mr. Maina Kiai, about the current situation of civic space and human rights in the world. "Human rights defenders are one of the groups that are most at risk. It is the responsibility of governments to protect these people", said Special Rapporteur Sekaggya while addressing the Council.

Vice-Minister for Foreign Affairs of Thailand, Mr. Jullpong Nonsrichai, presented Thailand's official application to become a member-state of the Governing Council, and briefed the participants of the meetings about the political situation in the country. "In presenting our application to the Community's Governing Council, Thailand wishes to assure all democracies that despite difficulties at home, we can all share our experiences in democracy, both its ups and downs. We can all contribue", said the Vice-Minister.

Deputy Minister of Foreign Affairs of El Salvador, Juan Jose Garcia, also spoke to the Governing Council, and informed it about the recent elections in the country. "The election process that took place on March 9 has been conducted in an exemplary way, as the Salvadoran population has massively and peacefully exercised its right to vote" said the Deputy Minister in his statement.

The week of events finished with an inauguration meeting of the Working Group on Elections, with the participation of representatives of the Group's co-chairs, Mexico and the Philippines, and of other participants of the Group- Romania, Republic of Korea, and the international organizations International IDEA, Open Society Foundations, National Democratic Institute and OSCE/ODIHR. Raul Cordenillo, Project Coordinator for International IDEA, presented to participants of the meeting the new initiative of the Community of Democracies and International IDEA, Practical Approaches to Improve Electoral Processes, to be conducted within the framework of the Working Group.