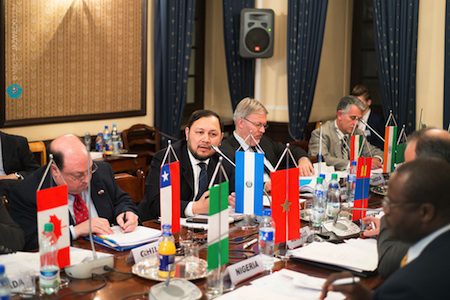 The year of 2013 is coming to an end, and it is time to summarize the activities of the Community of Democracies, evaluate the Community's work, and plan the upcoming year. To do so, the member states of the Governing Council of the Community gathered in Warsaw, host city of the Permanent Secretariat, for three intensive days of meetings.

The first day of meetings brought together two special bodies of the Community: The Working Group on CD Governance and the Executive Committee. The groups focused on organizational aspects of the Community's work, and discussed important questions such as how to increase the participation of civil society within the Community's mechanisms and how to further develop cooperation with the United Nations.

When the lively discussions were over, it was time for inspiration. The states' representatives joined ambassadors, government officials, and members of civil society and international organizations based in Warsaw, for an exclusive screening of the Polish film "Lech Wa??sa- Man of Hope". The film tells the story of democratic change in Poland and the Solidarity movement through the personal story of its leader, Lech Wa??sa. Thanks to the film and its great use of documentary materials and original soundtrack, representatives from around the world had a chance to acquaint themselves with the story of Polish democracy and taste the public sentiment of 1980's Poland. "Poland's greatest luck was to have someone like Wa??sa, who managed to lead the opposition while avoiding violence and civil war", reflected the Chair of the Presidency, Salvadoran Ambassador Ruben Zamora. Secretary General of the Community, Ambassador Maria Leissner, shared from her personal memories as an activist in Sweden during Solidarity's struggle for democracy: "I remember myself as an activist in a variety of activities trying to support Solidarity and the Polish people. We didn't understand that it could actually happen, but it did! Wa??sa knew he had the people of Poland and the whole world behind him, and it allowed him to take huge risks."

The state of civil society- Russia and Ukraine

Following this energy boost came the second and most intense day- the big meeting of the Governing Council. The first part of the meeting consisted of updates regarding the state of civic space in Russia, with the participation of Mr. Roman Udot, director of the "Golos" Association; Mr. Robert Amsterdam, founder of the international law firm Amsterdam and Partners; and Mr. Yuri Dhibladze, member of the Community's International Steering Committee representing the Centre for Development of Democracy and Human Rights. Participants discussed the shrinking of civic space in Russia, and in particular the "foreign agent" law, which requires non-governmental organizations that receive foreign assistance to register as "foreign agents". Mr. Dhibladze called for a series of actions from the Council's states, including: to counter statements that the law is compatible with human rights conventions and with laws in democratic countries; to dispute the claim that the law is a strictly internal matter; and to provide support and protection to civil society activists in Russia, whether in form of moral or material support, a stage for their voices, or – in extreme cases – asylum. Participants of the discussion highlighted the negative impact that the situation in Russia has had upon civil society in neighboring countries that adopt policies following the Russian model. A strong response to this, said the speakers, should strengthen the club of democratic nations and its members' appeal as role models for countries all over the world.

The discussion continued with an analysis of the situation in Ukraine, with the participation of Mr. W?odzimierz Cimoszewicz, former Prime Minister and Minister of Foreign Affairs of Poland and currently Chairman of the Foreign Affairs Committee in the Senate of Poland; and Ms. Oleksandra Delemenchuk from the Center for Civil Liberties in Ukraine. "The situation in Ukraine has great impact on the geopolitical situation in Europe", said Senator Cimoszewicz, stressing the urgency of the matter to be solved. The man concerns raised during the discussion were the use of violence by the government against peaceful protesters and the exclusion of civil society representatives from the political discussion.

The Council's meeting continued with a review of current processes and initiatives of the Community of Democracies. The budget for 2014 was approved; reports were presented by the Secretary General, the Presidency, and the International Steering Committee; and conclusions were drawn from the latest activities such as the United Nations Democracy Caucus and the "Stand for Civil Society" high-level event hosted by the President of the United States. An important development was the establishment of a new Working Group on Elections, co-chaired by Mexico and the Philippines. The new Working Group will address a variety of election-related topics, and is already engage in the execution of projects, such as the Practical Approaches to Improve Electoral Processes project, in cooperation with International IDEA and with the support of the Government of the Republic of Korea.

Participants of the Council's meeting were joined at this stage by two special guests: Ms. Elizabeth Linder, Politics & Government Specialist from Facebook, spoke to the members about the social network and the importance of governments engaging in true dialogue with the public through the platforms that the network offers. Professor Staffan Lindberg from the University of Gothenburg presented the "Variety of Democracies" project- Variety of Democracies (V-Dem) is a revolutionary academic project on a global scale, aiming at identifying, analyzing and presenting detailed indicators of democracy, in order to facilitate an evaluation of the state of democracy in various countries, as well as local and global trends throughout the years. "Having more values of democracy gives more validity to the democratic discourse", said Prof. Lindberg on the project and its potential contribution to democracy. This model "acknowledges different varieties of democracy, giving it higher legitimacy and stronger consensus."

The second day of the Council's meetings finished with a special reception hosted by Polish Under-Secretary of State Katarzyna Kacperczyk. The members were honoured by the presence of Prof. Henryk Szlajfer, one of the founding fathers of the Community of Democracies.

The third day of meetings brought together the member states of the Community's Working Group on Education for Democracy, co-chaired by Mongolia and Poland, to evaluate the activities of the group so far and decide on future steps. The Working Group debated the impact of the Charlottesville Declaration and the United Nations General Assembly Resolution on Education for Democracy, and ways to continue the processes these have begun. In this context, two special initiatives were presented: Mr. Matthew Hiebert, social entrepreneur from Aroundsquare Canada, presented "Strengthening Democratic Culture"- a special research project supported by the Government of Mongolia, identifying main topics to be addressed by civic educators around the world. Following, the Permanent Secretariat presented to the members of the group a workshop plan for schools on the Warsaw Declaration of the Community of Democracies, titled "Democracy in which we believe". The aim of the workshop is to acquaint school pupils with the democratic values highlighted in the Warsaw Declaration, and to encourage them to identify themselves with these values.

The last meeting was dedicated to the LEND Network, with the participation of representatives of the Permanent Secretariat; co-chairing states of LEND, Estonia and the United States, and LEND experts. The meeting summarized the activities of the Network and discussed the calendar of activities for the upcoming year, including possibilities for enlargement and development of the Network.

The Community of Democracies meetings in Warsaw were generously supported by the Ministry of Foreign Affairs of Poland, the City Hall of Warsaw, and the Tourist Office of Warsaw.