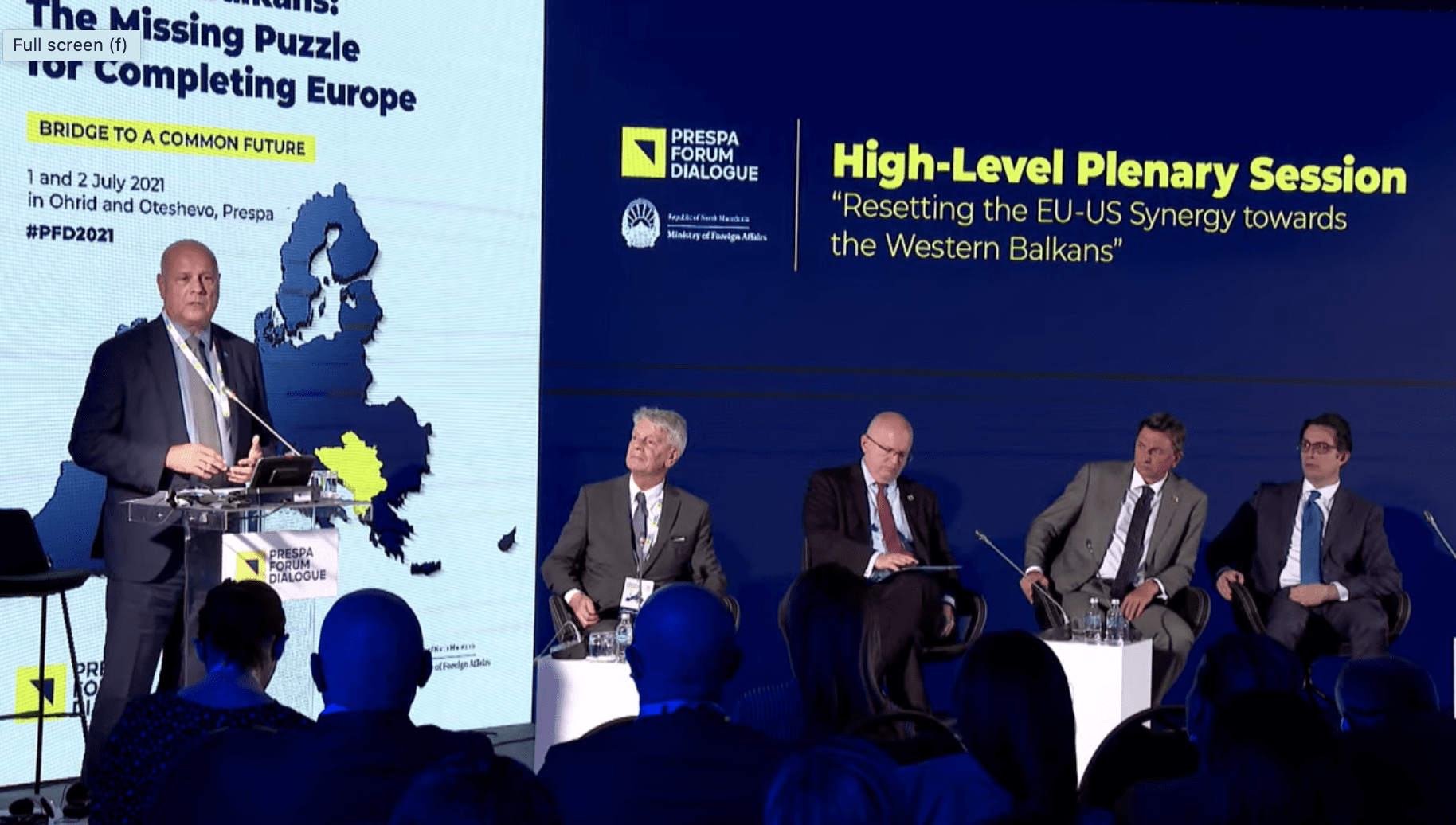 On July 2, 2021, SG Thomas E. Garrett participated in the High-Level Plenary Session at the Prespa Forum Dialogue held by the Ministry of Foreign Affairs of the Republic of North Macedonia. The session discussed Resetting the EU-US Synergy Towards the Western Balkans.

I am honored to participate in the Prespa Forum Dialogue, and I am especially honored to spend these two days with so many men and women who brought about the special accomplishments we are celebrating.

The Community of Democracies is an intergovernmental coalition comprised of Member States that support adherence to common democratic values and standards and seek to work together on these issues.

What makes the Community of Democracies different as a coalition of states, is that it was built not on geographical or regional or economic criteria, but on commitment to values of democracy in the Warsaw Declaration, our founding document of 19 principles of human rights, the rule of law and democracy.

The Warsaw Declaration is founded upon the Universal Declaration of Human Rights, especially the core belief all human beings are born free and equal in dignity and rights.

But the Warsaw Declaration also included new rights and principles not found in existing international treaties in 2000 and it includes   language on media freedoms and civilian control of the military.

Many countries were engaged in its creation – the Warsaw Declaration was a common endeavor that not only recalled the existing commitments that democratic governments had already made but also indicated standards necessary to help states enter and remain on the path of democracy.

For both established democracies and young democracies, the challenges are similar. Today, no democracy moves only from triumph to triumph but all face changing threats and new opportunities.

We see both challenges and opportunities so clearly in the example of North Macedonia.

The Community of Democracies recognizes that the best means of addressing challenges to democracy are dialogue and common action, which is the example provided to the world by the Ohrid Framework Agreement.

This example is needed today.

Through disinformation, misinformation and malign interference in democratic societies, authoritarian governments are becoming increasingly effective in the marketing of a different model of governance in opposition to democracy.  If we are to ensure democracy is strengthened, for instance in the coming post-pandemic world, democracies need to come together and counter this narrative.

As we approach 20 years since the conclusion of the Ohrid Framework Agreement, it is important to note the link between democracy and achieving security.

Democracies channel dissent through nonviolent means and manage conflict through respect for the rule of law and human rights.

Democracies are more likely to include women and youth as partners in security, as more gender-equal societies experience less conflict.

While the challenges to democracy globally are many, and democratic decline during the last decade has been widely discussed, democracy is still the best form of governance that can create the necessary conditions for human and economic development, respect of human rights, while ensuring peace and stability at the same time.

In closing, nations unite under regional banners, sometimes under religious or cultural groupings. So too should there be a coalition of countries acting as a bloc founded upon adherence to explicitly stated human rights and democratic values.

As we look to “Resetting the International Community’s synergy on the Western Balkans,” I think the reset can be based upon nations that hold the same values and ideals; on nations that want to build bridges towards the same goals and aspirations.

The reform and progress qualities we see in the Ohrid and Prespa agreements and in the examples set by North Macedonia will re-set this synergy.