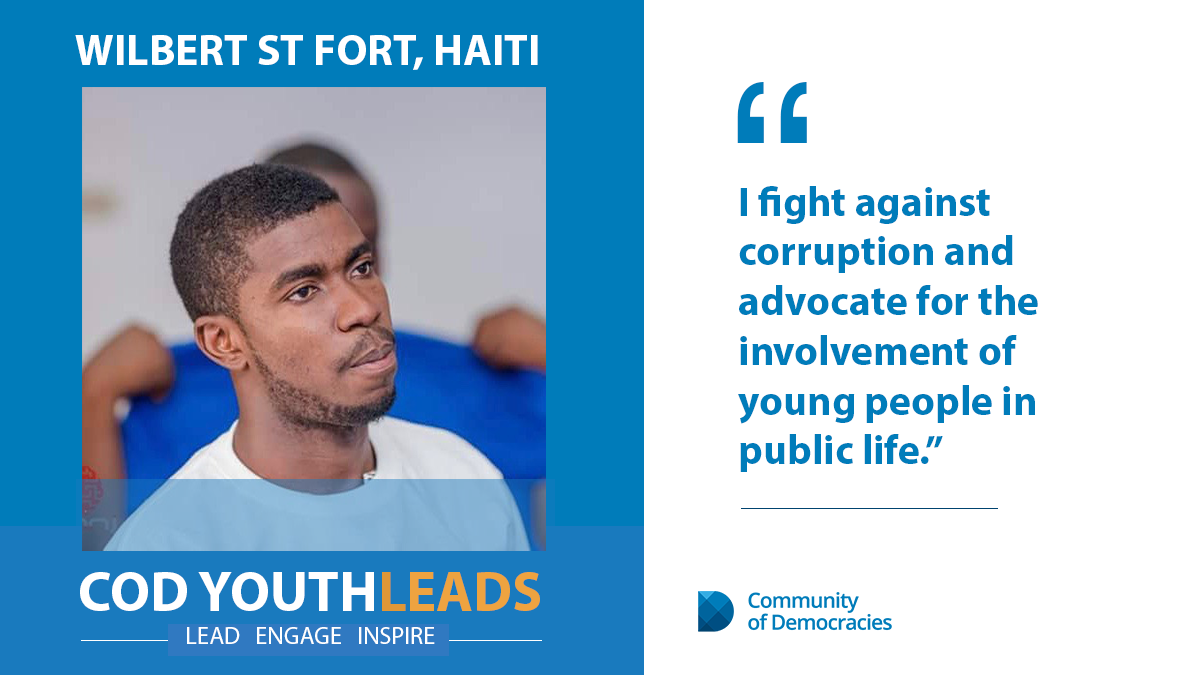 A youth activist from Haiti who is now General Coordinator of FINESTE, a civil society organization, Wilbert advocates for democratic reforms, including countering corruption and enabling young people’s participation in public life.  His life’s painful experiences, including being arrested and subjected to violence, hasn’t stopped Wilbert from fighting for a more just and inclusive world.

“ I fight against corruption and advocate for the involvement of young people in public life”- Wilbert St Fort, Haiti.

I am an activist, dating back to when I was a young student.  Then, I initiated demonstrations for the respect of the rights of the students.  In my young life, I have faced many challenges in my activism.  I was arrested and beaten and endured many forms of threat.

The right of every person to be free from arbitrary arrest or detention, to be free from torture and other cruel, inhumane, or degrading treatment or punishment, is one of the democratic principles of the Warsaw Declaration.

Nevertheless, I continue my advocacy. Since 2010, I have been fighting for respect of the democratic achievements of Haiti and the region. I worked for the government in the Ministry of Social Affairs and Labor, seeking to help textile sector workers learn their rights under the labor law and the minimum wage.

In 2018, I represented Haitian civil society at the Eighth Summit of the Americas in Peru, which brought together heads of governments of the American and Caribbean region under the theme of “Democratic Governance Against Corruption.” For this critical gathering, I served as a coordinator of Coalition 14, representing numerous regional NGOs.  With them, I was active in the preparation of a reference document, Lima Commitments (INSERT LINK), aimed to fight corruption in the region.

As highlighted in the Warsaw Declaration Principle 16, government institutions should be transparent, participatory, and fully accountable, and take steps to combat corruption, which corrodes democracy.

Currently, I am the General Coordinator of a civil society organization, FINESTE, based in Haiti. Through this organization, I fight against corruption, and advocate for the involvement of young people in shaping public policies and joining in democracy-building.  Everyone, including young people, should be able to participate in public life.  Equal access to public service and the freedom to conduct public affairs is one of the core principles of the Warsaw Declaration.

In my activism, I speak about the importance of the Warsaw Declaration. Young Haitian leaders can use this tool as a reference and commitment in the fight for the well-being of all.

For me, youth is the future of Haiti.