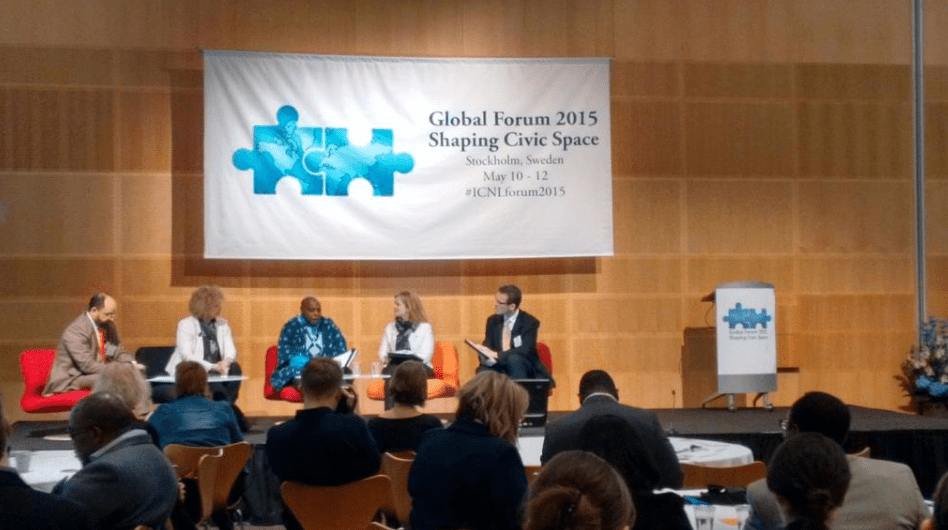 On May 11, Secretary General Maria Leissner participated in a high-level plenary on the Global Support to Civil Society at the International Centre for Not-for-Profit Law's (ICNL) Global Forum 2015 on Shaping Civic Space.

The forum, held in Stockholm, Sweden from May 10-12, brought together over 200 of the world's leading experts in civil society, government, multilateral institutions, and the donor community, all of whom attended to help civil society stand taller. Click here to view the photos from the event, courtesy of the Office of UNSR Maina Kiai.

At 9am, the conference began with a surprise video from two key figures who strongly advocate for democracy and human rights: President Barack Obama and Secretary General of the United Nations, Ban Ki-moon.

"(We are) working with the Community of Democracies to fight against law and regulations that restrict civil society", and thanking everyone gathered in Stockholm "for the courageous work you do everyday to defend freedom and human rights around the world" – President Barack Obama

"Our goal is to build resilient civil society organizations" – Secretary General of the UN, Ban Ki-moon

Shortly after, the panel began with the participation from the following speakers:

All of the participants stressed the critical global trend of shrinking civic space and the challenges that it entails for basic freedoms and human rights. In response to these growing restrictions against civil society, the panelists covered topics concerning the responsibilities of governments, private sector and civil society organizations to collaborate and work effectively to minimize the negative impact on citizens and their safety.

UN Special Rapporteur Maina Kiai, who sees himself as the "voice for civil society", predicted that the shrinking space for civil society would be reversed mainly through grassroots activism. Along these lines, he also asserted that "without freedoms of assembly and association, there is no democracy". UNSR Maina Kiai currently leads a set of regional dialogues under a collaborative project with the Community of Democracies, "Protecting Civic Space and the Right to Access Resources".

Evidently, the threat to democratic governance is  concern to Secretary General Maria Leissner, who spoke on holding governments accountablt by "highlighting the gap between international commitments and behaviour on the ground by governments". She further added that the institutions limiting the civic space are founded upon maintaining of power and control within a given country, and nothing more.

There were also talks of how to empower citizens with the momentum to effect change. "Go beyond the converted. Numbers add strength, diversity gives legitmacy", said Charlotte Petri Gornitzka.

Civil society organizations have faced an incredible amount of backlash from governments, which has ultimately limited their capacity and effectiveness in many parts of the world. The Community of Democracies is playing a vital international role to increase awareness of the restrictions on civic space and the developments that counter this trend. The Working Group on Enabling and Protecting Civil Society seeks to achieve this goal by stimulating diplomatic response, promoting and engaging stakeholders, providing technical assistance to governments and civil society organizations, and creating awareness campaigns.

Civil society provides a forum that is an essential part of the democratic process. By sponsoring discussions, debates, and the sharing of ideas, the Community of Democracies aims to educate its international peers about the disastrous efforts of restricted civic space on governments, humans and their potential to contribute.