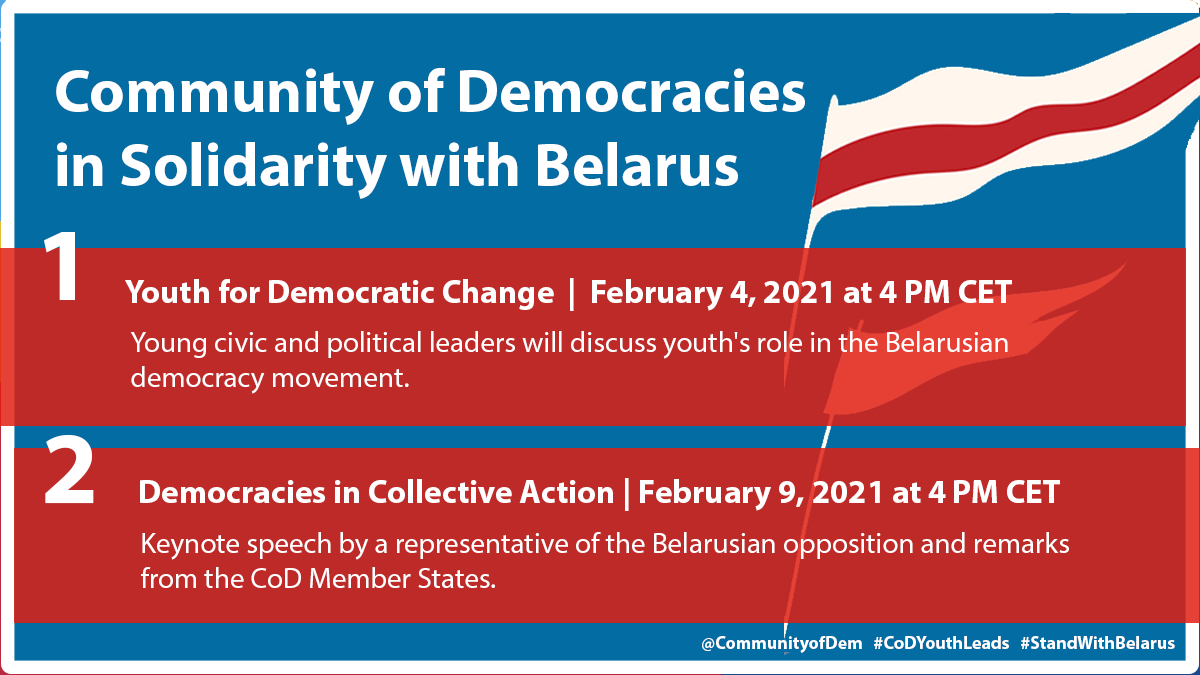 Community of Democracies in Solidarity with Belarus

A democratic transition occurs when significant change, societal and political, in a governing system moves a nation towards adherence to the universal principles of human rights and democracy, such as those standards found in the Warsaw Declaration. It occurs unexpectedly, as in August 2020, when the determination and bravery of the people of Belarus as they stood against authoritarian rule and a highly fraudulent election captured the attention of the world.

Goal 1: When a transition occurs, there is no precise template to follow; all transitions are unique in that they are indigenous expressions of a people’s aspiration for democracy, dignity, and human rights. CoD events will address the need to hear from representatives of Belarus’s men and women to understand their hopes and plans.

Goal 2: Embrace new opportunities for democratic development through multilateralism and democratic collective action.  Democracies strengthen as countries work together.  As pro-democracy protests in Belarus began following the fraudulent presidential election on August 9th, 2020, many CoD Governing Council Member States engaged over concerns about the conduct of the election, ongoing violence against protesters, and the detention of opposition leaders.

In Solidarity with Belarus: Youth for Democratic Change, February 4, 2021

On Thursday, February 4th, 2021, the PSCD will host, through its digital platform,  youth civic and political leaders to discuss youth’s role in the Belarusian democracy movement. The one-hour event will consist of a keynote message from a young Belarusian democracy activist and a series of interventions from the CoD YouthLeads responding to the keynote and sharing experiences from their countries of youth demanding democratic change and participating in political processes.

In Solidarity with Belarus: Democracies in Collective Action, February 9, 2020

On Tuesday, February 9th, 2021, to mark the six months of ongoing protests in Belarus since the presidential election, the PSCD will organize a high-level event with the involvement of representatives of Belarusian opposition, the CoD Governing Council Member States supporting the democratization of the country and international non-governmental organizations active for Belarus.

A one-hour event will aim to discuss the future of the democracy movement in Belarus, hopes, and expectations by opposition leaders and seek to identify strategies on how democracies can support Belarus’s people in their fight for democracy.