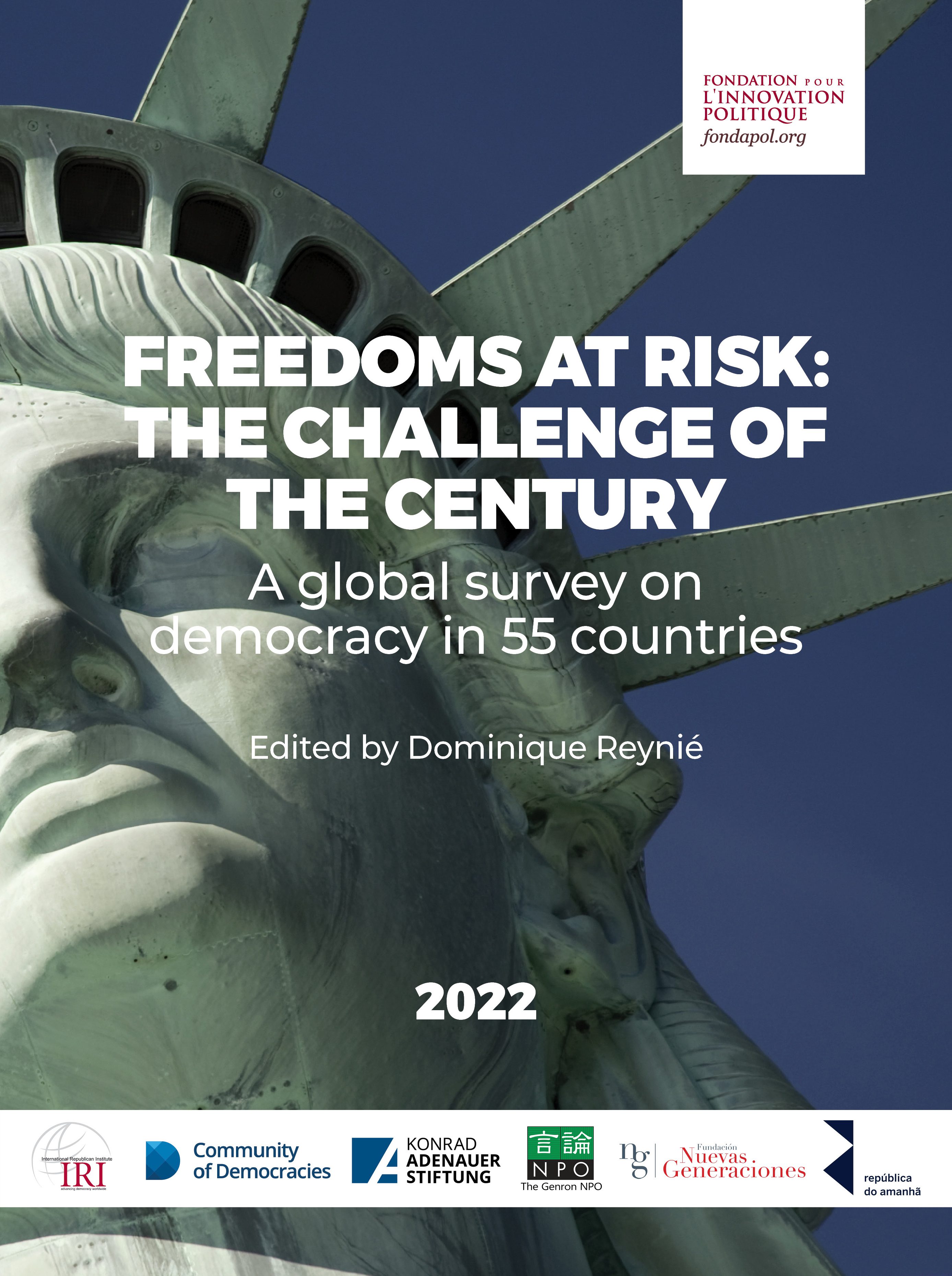 Freedoms at risk: the challenge of the century

A global survey on democracy in 55 countries

Democracies today find themselves in a perilous situation, 30 years after the fall of the Berlin Wall signaled their moment of triumph. Externally, the current tensions between the democratic world and authoritarian regimes hark back to the Cold War. Internally, not since the 1930s have identity conflicts, populism, authoritarianism, racism and anti-Semitism undermined democratic societies to such an extent. For the democratic world, the combination of external and internal threats marks the obvious danger of the moment.

In the face of these major challenges, democratic societies still have one priceless asset that is illustrated in the results of our study: the citizens surveyed have confirmed their allegiance to freedoms and to democracy. Our data show that when they voice disapproval, more often than not, the object of their criticism is not the idea of democracy itself but rather the way in which democracy functions in their country.

This is the troubled context within which we have created the global survey Freedoms at risk: the challenge of the century, conducted in 55 countries. This survey was born out of close cooperation between the Fondation pour l’innovation politique (France), the International Republican Institute (the U.S.), the Community of Democracies (intergovernmental organization), the Konrad-Adenauer-Stiftung (Germany), the Genron NPO (Japan), the Fundación Nuevas Generaciones (Argentina) and República do Amanhã (Brazil).

PART I. WHO ARE DEMOCRACIES AFRAID OF

Among the authoritarian powers (China, Russia, Turkey), China is the one that most worries the democratic world. 60% of respondents consider China’s posture on the international stage to be “worrying”; 52% feel the same way about Russia and 37% about Turkey. The deterioration of China’s image is drastic when compared to our 2018 survey in 42 countries, where less than half (49%) of respondents found it to be worrisome.

China is viewed negatively in the Asia-Pacific region. The impact of Beijing’s increasing military presence in the South China Sea is being felt across the entire region, leading to harsher public perceptions of China. New Zealanders (51%), South Koreans (54%), Australians (56%) and the Japanese (60%) are now opposed to the deepening of relations with China. However, both Filipinos (59%) and Indonesians (65%) want to see a deepening of their countries’ relationships with China.

China divides the European continent. Among Europeans (in EU Member States), concerns about China’s posture on the international stage have spread rapidly and are now shared by 60% of respondents, compared to 40% in 2018. Public opinion is more favorable to a deepening of relations with China in the Eastern European Union (64%) than in the Western European Union (59%).

A less influential Russia remains feared by its neighbors. Only a small minority (4%) of those surveyed named Russia as the most influential global power. Nonetheless, a majority (52%) of respondents still indicate that they are worried by its posture on the international stage.

Turkey is disorienting for Europeans. Turkey is the authoritarian power that the democratic world worries the least about: 37% of respondents say that they are worried about Turkey’s posture on the international stage. However, in the European Union, Turkey (63%) is the main cause of concern ahead of Russia (61%) and China (60%).

Compared to our 2018 survey, the image of the United States has improved significantly. In 2018, over half of respondents (56%) were concerned by the posture of the United States on the international stage. In the same countries, in 2021, a third (33%) of respondents are worried about the United States. This reaction can be seen within American society itself: although almost a third of Americans (30%) are still worried by their country’s posture on the international stage, this result is down by 13 points compared with 2018 (43%).

Public opinion is divided on the prospect of a new World War. The idea “that another World War will break out in the coming years” is considered likely by half the people surveyed (50%). There are very strong variations by country. Americans (59%), the Lebanese (58%) and Australians (57%) are above the global average. South Koreans (49%), the Japanese (48%), Israelis (47%) and Canadians (45%) are close to the global average. Only 38% of Europeans (EU) think a World War is likely, as do the British. On the European continent, Ukrainians (55%), Cypriots (54%), Greeks (49%), Poles (48%) and the French (44%) are particularly worried.

PART II. WHAT ARE DEMOCRACIES AFRAID OF

Concerns about security issues are widespread. The vast majority of respondents said that they were afraid of crime (89%), terrorism (83%), and, to a lesser extent but still in the majority, immigration (63%) and Islamism (59%).

Interpersonal mistrust is prevalent in democratic societies. 36% of respondents say they can trust most people, while 64% think you can never be too careful when dealing with others.

Public ambivalence towards social media. On the one hand, social media are looked upon unfavorably by an overwhelming majority, who believe that they “are bad because they facilitate the spread of false information” (73%); on the other hand, they are also considered to be “good because they help people get informed” (83%).

The public wants digital platforms to be more regulated. Overall, three-quarters of respondents (73%) believe that Big Tech – or the GAFAM – have too much power in terms of information and public debate and that their governments should be able to control them more.

Manipulation of information and foreign interference. Most respondents (88%) condemn the disruption of electoral campaigns by foreign powers using the Internet and social media.

PART III. IN A FRAGILE DEMOCRATIC WORLD, ATTACHMENT TO THE EUROPEAN UNION IS GROWING STRONGER

Citizens see the euro as a protector of their assets. Anti-euro rhetoric, which has long been adopted by populists, is now perceived as a threat to the material assets owned by Europeans. Illustrating this, two-thirds of Eurozone citizens (64%) say that they want to keep the European currency. One in four (28%) would prefer to switch back to their national currency but believe that this would not be possible. Only a small minority (8%) believe that it would be both preferable and possible to abandon the euro.

The Western Balkans: between European aspirations and weariness. In the Western Balkans, a majority of respondents view their country’s potential ascension to the European Union as a good thing (54%). Meanwhile, 29% believe that it is “neither good nor bad”, while 17% see it as “a bad thing”. The results show significant contrasts between the various countries. While most Albanians and Kosovars are positive about their accession to the European Union, only one in two Macedonians and one in three Serbians share this opinion. In Bosnia and Herzegovina, the country’s ethnic partition may be a significant factor behind this, respondents living in Serbian regions, such as Republika Srpska, are more negative about potentially joining the European Union: 40% believe that this would be “a good thing”, while 18% see this as “a bad thing” and 42% replied “neither good nor bad”.

Support for a European army is reinforced. More than half (55%) of Europeans (EU) surveyed are in favor of forming a common army in addition to their national armies. The populations most in favor of a European army live in regions with high geopolitical tensions (82% in Kosovo, 75% in Albania and 72% in Greece).

Out of the six different types of regimes presented, 36% of respondents supported “being led by a strongman who does not have to worry about parliament or elections” and 25% supported “having the armed forces govern the country”. 25% of respondents who support the idea of a strongman find China’s posture on the international stage reassuring (compared to 18% on average), 28% have the same view of Russia’s posture (as opposed to 20%) and 28% find Turkey’s posture reassuring (compared to 19%). Similarly, among those who believe that having the armed forces govern the country would be a good thing, 28% feel reassured by China, 32% by Russia and 34% by Turkey.

China’s handling of the Covid-19 pandemic may have strengthened public support for the acceptability of authoritarian power among certain people. Half of our survey’s respondents (51%) agree with the idea that “authoritarian governments are more efficient than democratic governments in dealing with pandemics, such as the Covid-19 crisis”, while 49% disagree with this statement.

There is significant support (62%) for a political system based on experts. However, we found that the idea of “having experts decide what is best for the country, rather than the government” has not increased in popularity as a result of the pandemic of Covid-19. In 2018, in the 42 countries surveyed, 57% of respondents believed that this form of government was a good way of governing; in 2021, the average figure for these same 42 States was 58%.

Transparency of the electoral process raises doubts. Globally, 43% of respondents believe that the electoral process is not transparent in their country. There are large disparities between countries. In Northern Europe, most of the people in Norway (87%), Finland (86%), Denmark (84%) and Sweden (83%) believe that the electoral process in their country is transparent. Strong results can also be seen in Switzerland (85%), New Zealand (82%), Canada and Cyprus (81%), but also for Australia (79%), Israel (77%), South Korea (75%), the Philippines and the United Kingdom (72%). Nigeria has the lowest average (21%) of all the countries surveyed.

The idea of voting rights being dependent on knowledge is most popular among the younger generations. Half of under 35s (52%) approve this idea, compared with 31% of people aged 60 and over.

Abortion rights are being challenged. Overall, 45% of respondents said that they are opposed to abortion rights. While a majority (55%) are in favor of them, there does not seem to be any guarantee that these rights will be maintained across the generations: for instance, half of 18–34-year-olds (50%) are against abortion rights, compared with 33% of people aged 60 and over.

The State should give businesses more freedom. The democratic world has a positive view of globalization. Nearly two-thirds of respondents view it as “an opportunity” (65%) rather than a threat (35%). Our findings also reveal an attachment to economic liberalism, defined here as limiting the government’s role in the economy and strengthening the freedom of enterprises: 58% believe that “the role of the government in the economy should be limited and the freedom of enterprises should be strengthened”, while 42% would like to see a stronger role for the government and increased control over enterprises.

Widespread approval for representative democracy. Out of the six different types of regimes presented, the representative democracy model (“having a democratic political system with an elected parliament that runs the government”) is the most widely supported (81%), followed by the direct democracy model (70%) defined as “having citizens decide what is best for the country, rather than the government”.

Attachment to freedom is almost unanimous. Respondents believe in the importance of the ability to protest (83%), the ability to take part in the decision-making process (95%), the ability to vote for the candidate of your choosing (96%), having the right to say what you think (96%) and having freedom of the press (94%).