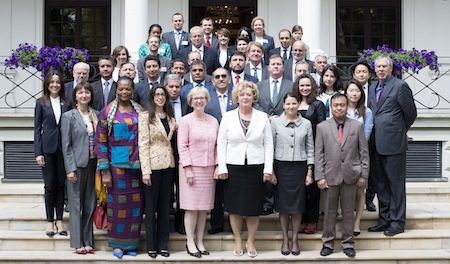 Participants of the meeting celebrated the 14th anniversary of the Warsaw Declaration by coming back to the 19 principles of democracy stated in the Declaration, and choosing the one that is dearest to them. Their choices can be viewed on the Community’s Facebook page.

The first part of a day-long session began with a discussion on the situation in Ukraine. Government and civil society representatives from Ukraine took part in the conversation, and presented the latest efforts to establish democratic norms in the country, in light of ongoing difficulties. “The revolution in Ukraine began because we wanted to fight for our freedom of choice and for our right to take part in determining our country’s destiny”, said Oksana Nechyporenko, Coordinator of the Reanimation Package of Reforms for Ukraine, a civil society platform assisting in democratic restructuring in the country. “Civil society needs not only financial support from the government, but first and foremost, an enabling legal framework to facilitate its activities.”  The Special Advisor to the Secretary General, Matyas Eorsi, shared with the Council’s members the conclusions from the assessment missions led by him, and Ievgen Vorobiov, an expert on Ukraine from the Polish Institute of Foreign Affairs, described the main challenges faced by the new administration in Kiev: establishing a healthy, diversified and independent political party system; empowering civil society in all regions of the country; and conducting reforms to increase the independence of the judiciary. Deputy Minister of Foreign Affairs of Ukraine, Danylo Lubkisvky, addressed participants via video-conference, and thanked them for the ongoing commitment and engagement of the Community in the Ukrainian democratization process.

Following the discussion on Ukraine, the second session was devoted to another country facing serious challenges to its democratic norms – Thailand. With the participation through video-conference of former minister (now in exile) Jakrapob Penkair, human rights attourney Robert Amsterdam, and civil society activist Evelyn Balais-Serrano, the Council discussed the serious developments following the military coup in Thailand and steps that should be taken to restore democratic order in the country.

A presentation by Deputy Director of OSCE/ODIHR, Beatriz Balbin, on the situation of civil society in the developed world concluded the high-level segment of the Council’s meeting. The discussion employed the Community’s approach: all countries should engage in a process of constant learning and improvement – even those that already enjoy a high level of democracy.

The second part of the day was devoted to ongoing issues related to the Community’s work and projects. The Secretary General, the Presidency and the various Working Groups presented their quarterly reports. Plans for the coming year were presented (including preparations for the Eighth Ministerial Conference in El Salvador), and other procedures were discussed. Among these, special attention was given to the re-election of Ambassador Maria Leissner as Secretary General of the Community and to the decision to support the process of democratic consolidation in Ukraine.

The meeting of the Governing Council has been kindly supported by the Ministry of Foreign Affairs of Poland, the Warsaw Convention Bureau, and the Office of the Marshall of the Mazowieckie Voivodeship in Warsaw (Department of Culture, Promotion and Tourism). All pictures from the Council's meeting can be found on the Community's Flickr page.