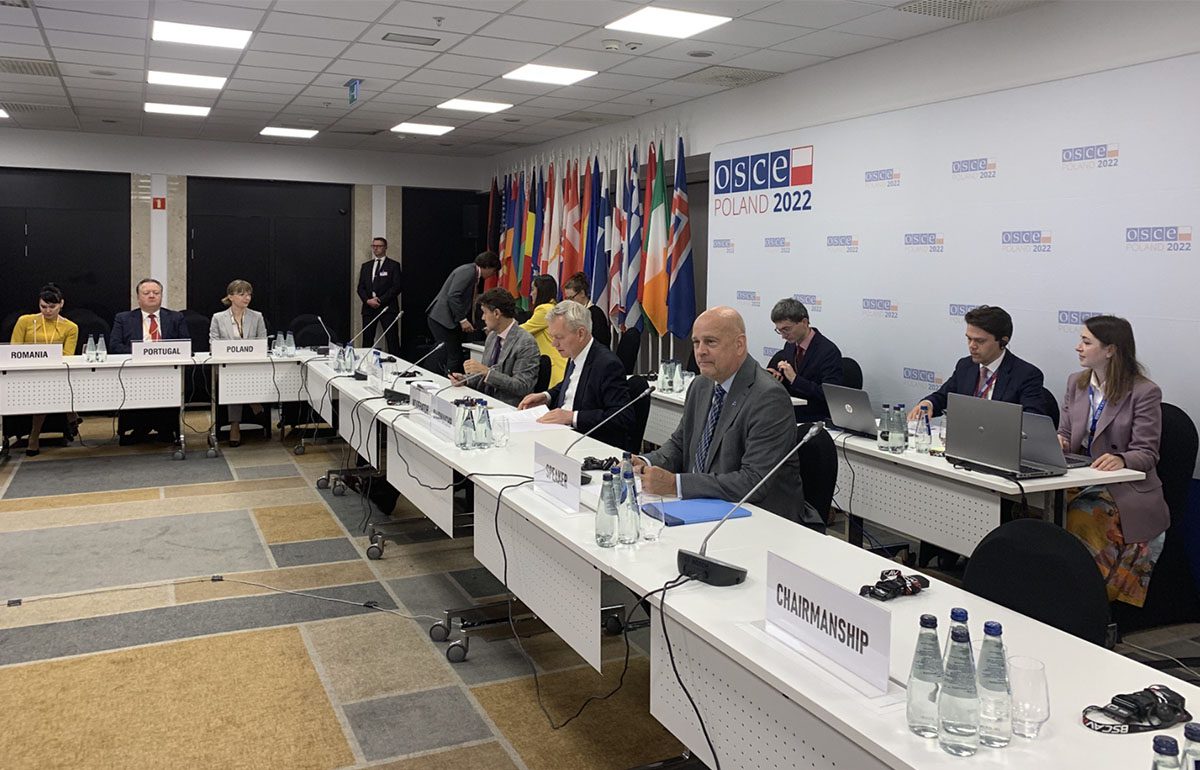 ‘The need to defend democracy is today stronger than ever – like never before it is clear democracy means peace and autocracy means war and violence’- highlighted SG Thomas E. Garrett delivered in his remarks at the closing session of the OSCE Warsaw Human Dimension Conference on October 7, 2022.

Welcome to the Closing Session of the Warsaw Human Dimension Conference.

My name is Thomas Garrett and I am the Secretary General of the Community of Democracies – an intergovernmental coalition founded and based in Poland.

The Community of Democracies is composed of Member States that support adherence to common democratic values and standards outlined in our founding document, the Warsaw Declaration.

I would like to begin by expressing my thanks to the Polish Ministry of Foreign Affairs and the Minister of Foreign Affairs, HE Mr. Zbigniew Rau, the OSCE Chairman-in-Office, for their commitment in organizing this Conference.

This is also the appropriate moment to commend Director Matteo Mecacci and his staff at the OSCE Office of Democratic Institutions and Human Rights for the important work they do.

The Warsaw Declaration was adopted in 2000 by 106 nations.  It comprises 19 principles that  define the essential practices and norms for the establishment and consolidation of democracy.  The Declaration emphasizes the interdependence between peace, development, human rights and democracy and its principles speak to free and fair elections, equal protection of the law, freedom of opinion and of expression, freedom of thought conscience and religion, and freedom of peaceful assembly and association, among others.

I was encouraged and heartened to see the most important principles of the Warsaw Declaration were thoroughly discussed during this Human Dimension Conference.

The Conference programme was rich and interesting – there were plenary sessions and numerous side events which enabled discussion of human rights and fundamental freedoms in the OSCE area.

The Community of Democracies organized a side event for this Plenary: “Technology in service of democracy and human rights – Elections in the digital era.”

With representatives from Georgia, which chairs the Community of Democracies Working Group Democracy and technology, and with civil society participation, our event looked at the benefits of using technology in elections, as well as vulnerabilities emanating from it, including aspects of cybersecurity.

These issues were touched upon during the second Plenary session. The session reflected on a dangerous trend of curtailing these rights and the activities of civil society organisations and human rights defenders, especially in times of crisis or armed conflict. Human Dimension Conference participants spoke eloquently to new regulations hampering the work of human rights defenders, measures such as  barriers hindering access to domestic and foreign funds, more stringent reporting and disclosure obligations and the stigmatization or discrediting of their work.  I thank the organizers and the conference for highlighting this important matter.

On the third day participants of the Conference focused on racism, xenophobia, discrimination and intolerance, including based on religion or belief.

Progress has been made by some participating States towards implementing their commitments on addressing intolerance, discrimination and hate crime, including support to victims of hate crime. This Conference shared share good practices and lessons learned and examined effective educational strategies and measures, on how civil society efforts can address intolerance and discrimination to foster mutual respect and understanding, inclusion and social cohesion.

Freedom of opinion and expression, media freedom and safety or journalists are key pillars of democracy. These extremely important topics were elaborated in the fourth Plenary Session. This session explored the interconnection between the state of democracy and media freedom while focusing on the current situation with freedom of expression, freedom of the media and media pluralism. The role of national authorities in ensuring safe and free working conditions for independent media and journalists and increasing need to counteract propaganda for war, hate speech and disinformation were aired.

The next Plenary Session focused on the rights of persons belonging to national minorities; treatment of citizens of other States and human rights of migrants; Roma and Sinti issues; equal opportunities and rights for women and men and violence against women and children.

This session provided guidance and recommendations to participating States on how best to integrate diverse societies, respond to immediate and long-term needs, as well as take stock of the implementation of the relevant OSCE commitments.

The seventh Session was dedicated to extremely important subject: the Rule of Law. The session reflected on the prevention and eradication of torture, abolition of capital punishment and protection of human rights and fighting terrorism

Discussion focused mainly on the issue of accountability for human rights violations committed in the fight against terrorism, such as torture and other ill-treatment, as well as address the need for effective oversight of counter-terrorism efforts to prevent future violations of human rights.

The next day discussions were conducted on the subject of democratic law-making, Independence of the judiciary, right to a fair trial, including in case of armed conflict. The sessions covered also the rule of law challenges caused by the state of emergency declared in many OSCE participating States due to the pandemic and to armed conflict.

The last Plenary session focused on humanitarian issues, mainly on the commitments of the States when participating States face a significant increase of persons seeking protection, while also dealing with the impacts of COVID-19 on fundamental freedoms, including freedom of movement. The military attack of the Russian Federation on Ukraine that started on 24 February 2022 and the ensuing armed conflict generated one of the fastest and largest forced displacement crises since World War II in the OSCE region.

The Conference and our discussions clearly proved that values-based alliances are today of utmost importance since we still find, in different parts of the world, including in parts of the OSCE area,  the worrying trend of democratic backsliding, deterioration of the respect for human rights and fundamental freedoms, and significant challenges to the rule of law and functioning State institutions.

In the whole OSCE area we are witnessing today wide-ranging problems, such as the rise of populism, or corruption, and other issues, sometimes lead to increased xenophobia and social polarization; the global pandemic adds to the never-ending challenge to open societies, and its consequences for the enjoyment of human rights.

This year’s Warsaw Human Dimension Conference  takes place during a very particular period. Russian aggression is posing an essential threat not only to Ukraine but also to the established order of international peace and security.

Ukrainians are defending their choice of democratic values against authoritarism, fighting for their country to join the family of democratic countries that allow their citizens to develop and ensure respect for human rights and freedoms and economic prosperity.

Democracies must respond to this challenge by supporting Ukraine and then by strengthening their own domestic adherence to the rule of law and human rights and Democracy within their borders. Democracies need to work in partnership and practical multilateral cooperation is the key to countering corruption, protecting human rights, and responding to authoritarianism.

Democracies are not perfect but resilient democracies are based on a solid and effective civic participatory process which, unlike authoritarian nations, protect the rights to freedom of expression, opinion, association, and peaceful assembly, respect and promote civic space, online and offline, highlighting the paramount role of freely functioning civil society and independent media.

Yet, even as an inherent characteristic of democracy, resilience needs to be constantly pursued. We must promote and nurture the full, equitable, and meaningful participation in the open and inclusive civic spaces that underpin the rule of law, consolidating pluralistic, independent institutions.

Democratic backsliding is and probably will constitute an important challenge for many countries in the following years. Thus, the main question that one should pose is how we can defend democracy, what tools should be used to strengthen it, how to use or improve existing international arrangements to bring halt to erosion of the system.

The need to defend democracy is today stronger than ever – like never before it is clear:  democracy means peace and autocracy means war and violence.