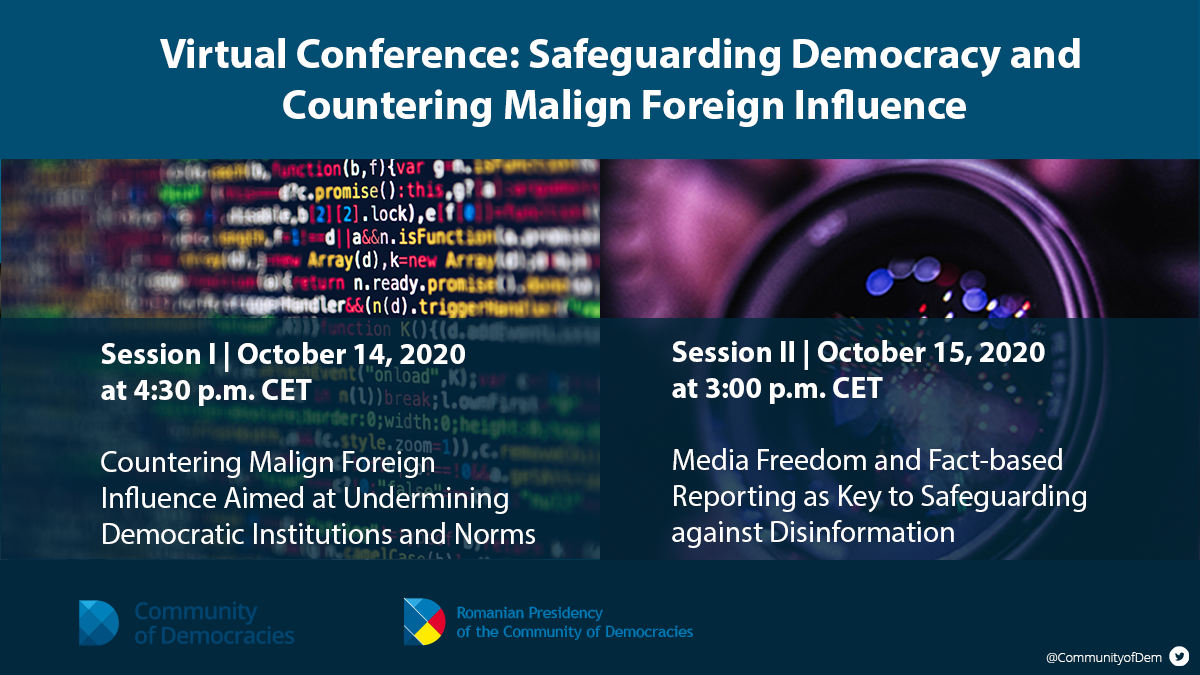 The Permanent Secretariat of the Community of Democracies (PSCD) held a series of events focusing on countering malign foreign attempts to undermine  democracy (Paris, July 2019; Warsaw,  October 2019 and January 2020.) The events gathered the Community of Democracies (CoD) Governing Council Member States, the wider diplomatic community, and civil society representatives and provided a platform to discuss challenges related to malign foreign activity in democracies and the importance of strengthening democratic institutions and the rule of law for addressing them.

Building on this dialogue, the PSCD together with the CoD Presidency Romania will continue this critical discussion on existing threats to democracies generated by malign external influence, including new dangers from  a large increase in the dissemination by malign actors of deliberately false information associated with the current global pandemic.

A global virtual conference, “Safeguarding Democracy and Preventing Malign Foreign Influence,” offered in a digital format using the WEBEX events platform,  will be held as a two-day event and include two panel discussions: 1) Countering Malign Foreign Influence Aimed at Undermining Democratic Institutions and Norms; and 2) Media Freedom and Fact-based Reporting as Key to Safeguarding against Disinformation.

Discussions will be livestreamed on Facebook YouTube- the links for each panel are included in the description below.

Watch live on You Tube

The 70-minute event will serve as a platform for governments to draw attention to malign foreign efforts which have occurred in recent years, highlight trends, and discuss available democratic tools and frameworks to counter malign foreign influence. These may include: attacks on elections infrastructure; influencing electoral commissions; training media actors on providing favorable coverage for autocratic actors; corrupt economic deals and public financial management; attacks against political parties and candidates, especially women; opaque political financing; sophisticated disinformation campaigns; and barriers to the free exchange of information.

The panel is intended as a dynamic discussion regarding how democracies can prepare to deter and defend against external threats from authoritarian influences aiming to weaken trust in democratic governments and societies, and undermine the rules-based international order. The panel will examine the similarities and differences in the motives and tactics of authoritarian perpetrators.

Watch live on You Tube

The 75-minute event will focus on the critical role of media freedom and fact-based reporting in countering disinformation and propaganda  that can rapidly spread in the times of pandemic, undermining governments’ health strategies, democratic institutions and public trust.

The panel will aim to discuss best practices that governments can utilize to counter false narratives promulgated by governments, and both traditional and social media, while adhering to the Warsaw Declaration principle of the right of the press to collect, report and disseminate information, news and opinions.