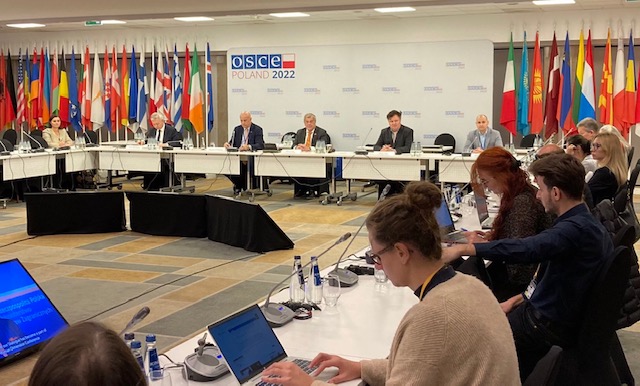 Secretary General at the Warsaw Dialogue for Democracy

On October 6, 2022,  SG Thomas E. Garrett spoke in a panel discussion on Democracy as a remedy for authoritarianism held as part of the Warsaw Dialogue for Democracy.

Allow me to welcome you today to a very timely discussion, that is:

Why is it important for us to defend democracy in Ukraine against authoritarian Russian regime?

It is my pleasure to participate again in the Warsaw Dialogue for Democracy and to represent the Community of Democracies – an intergovernmental coalition comprised of Member States that support adherence to common democratic values and standards, as outlined in our founding document,  the Warsaw Declaration. I want to express my thanks to the Polish Ministry of Foreign Affairs and especially to the Minister of Foreign Affairs, HE Mr. Zbigniew Rau, for organizing today’s Dialog which from 2012 has brought together civil society activists, academics, experts and government representatives from around the world to discuss ways of promoting democracy.

This year’s 10th anniversary edition of the Warsaw Dialogue for Democracy takes place as Russian aggression poses a threat not only to Ukraine and the region but also to the international order of  peace and security. In this war which has been thrust upon them, Ukrainians are defending democratic values against authoritarianism, fighting for their country to join the family of democratic countries.

I referred a moment ago to the Warsaw Declaration.  At the founding of the Community of Democracies in June 2000, 106 nations adopted the Declaration, with its 19 principles of human rights, democracy and the rule of law.  The Russian Federation and Ukraine were among those 106 nations.

Since then, their respective adherence to the Warsaw Declaration has sharply diverged.  For 22 years, Ukraine has followed a path of democracy, with starts and stops but always while seeking adherence to democratic values. The Russian Federation has spent the past two decades repressing universal human rights and freedoms of its citizens and we see it isnot limiting itself to suppress its own citizens – Russia has invaded sovereign nations Georgia and Ukraine while keeping troops in Moldova.

Moscow’s interpretation of the geopolitical landscape and the international order is inseparable from its domestic politics and autocratic regime. The regime has been actively supporting autocratic governments around the world, trying to limit and undermine liberal and democratic values globally. Thus, the question before us: Why is it important for us to defend democracy in Ukraine against authoritarian Russian regime?

As we turn to our distinguished panelists, let me quote Timothy Snyder from the last edition of Foreign Affairs: “Russia, an aging tyranny, seeks to destroy Ukraine, a defiant democracy. A Ukrainian victory would confirm the principle of self-rule, allow the integration of Europe to proceed, and empower people of goodwill to return reinvigorated to other global challenges. A Russian victory, by contrast, would extend genocidal policies in Ukraine, subordinate Europeans, and render any vision of a geopolitical European Union obsolete.  A Russian victory would strengthen fascists and other tyrants, as well as nihilists who see politics as nothing more than a spectacle designed by oligarchs to distract ordinary citizens from the destruction of the world…This war, in other words, is about establishing principles for the twenty-first century. It is about policies of mass death and about the meaning of life in politics. It is about the possibility of a democratic future.

I ask each panelist to comment on this paragraph and answer: Are we indeed witnessing a struggle between two opposing visions of world with such dramatic consequences?