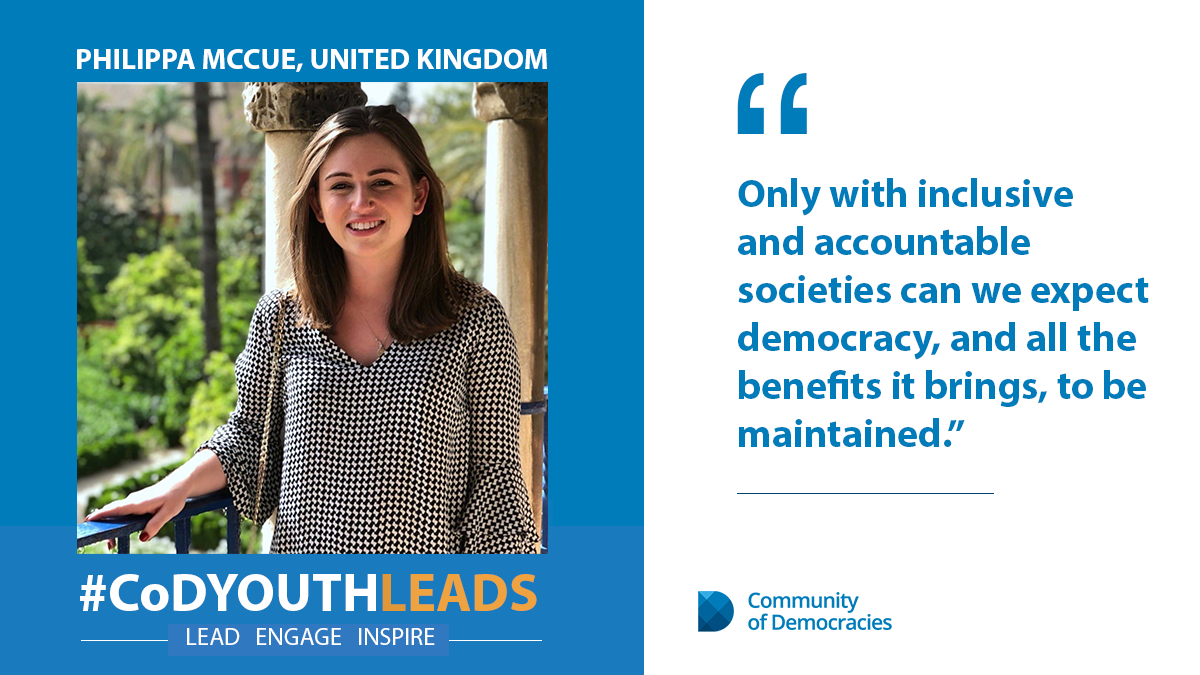 Working for advancing SDG16 (Peace, Justice, and Strong Institutions), Pippa recognizes the value of strong, inclusive democratic institutions. In her story, she highlights how upholding the Warsaw Declaration affects people in so many ways, including young people’s participation in public life.

“Only with inclusive and accountable societies can we expect democracy, and all the benefits it brings, to be maintained”- Pippa McCue, UK.

As someone who enjoys a good debate, I’ve always valued the fact that democratic principles guarantee my right to freedom of opinion and freedom of speech- a core democratic principle enshrined in the Warsaw Declaration. But only as I got older did I became aware of the broader benefits of democracy. In particular, I became interested in the relationship between democracy and security, and between security and development. As presented in the Community of Democracies’ study,  Democracy and Security Dialogue, liberal democracy is the best option for achieving both domestic and international peace and security. In turn, the UN’s 2030 Sustainable Development Agenda is based on the idea that “there can be no sustainable development without peace, and no peace without sustainable development.”

Over the past few years, I have been able to work personally on the promotion and implementation of Sustainable Development Goal (SDG) 16 on Peace, Justice and Strong Institutions. My engagement started with my internship at the Community of Democracies, where I worked on the project “Engaging Women in Sustainable Peace.” I then had the opportunity to go to Argentina to work with an NGO to investigate how far the security and justice reforms in the province of Santa Fe had gone in achieving the goals of SDG 16.

Most recently, I undertook an internship at the UN, where I was working at the heart of the Peace and Security Pillar. My experiences taught me the necessity of combating corruption if we are to build and maintain strong democratic institutions.  No matter how good policies look on paper, if corruption is present, their intended benefits won’t be realized, and trust in government will erode. As outlined in Principle 16 of the Warsaw Declaration, government institutions should be transparent, participatory and fully accountable to the citizens and take steps to combat corruption, which erodes democracy.

Corruption mainly affects the most disadvantaged and so contributes to rising inequality. I became involved in a project to use creative methods such as games to educate citizens in the EU about what corruption looks like, to help empower them to fight against it. I think citizens must have the knowledge and awareness to participate actively in a democracy to ensure that governments are held accountable, and the values of freedom and equality honored.

And so, promoting the 19 principles of the Warsaw Declaration is important, particularly for youth. In many countries around the world, democracy is under threat, as inequality increases, and citizens feel that democratic governments are not delivering on their promises. If people don’t think that their voices are heard, they will become disillusioned. Many younger people, who face particular barriers to political participation, already feel this way. But without the values of the Warsaw Declaration, of equal access to education, freedom of speech, equal access to justice, and participation in public life, the most disadvantaged will have no opportunity to influence political life and will only fall further behind. Young people have a lot to offer to bring about positive change, and their participation is key to ensuring social inclusion. Only with inclusive and accountable societies can we expect democracy, and all the benefits it brings, to be strengthened.