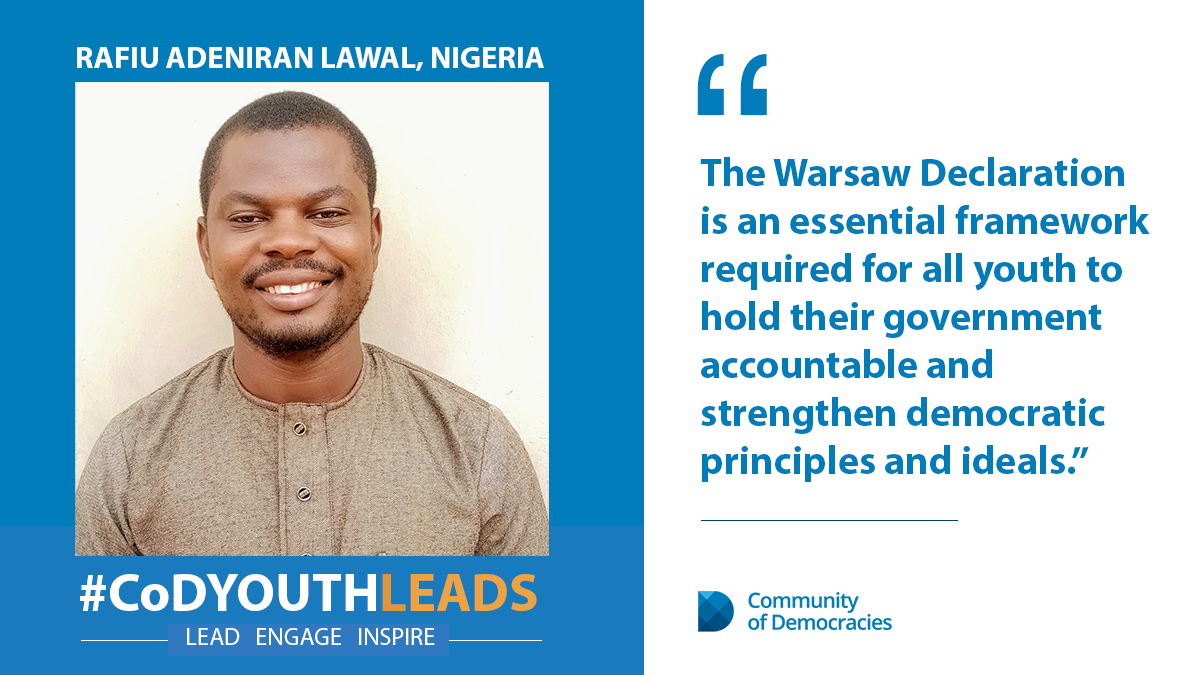 In his childhood, Rafiu witnessed human rights abuse to his family. When Nigeria turned to the democratic path, he founded a civil society organization to empower young people to take part in building the country’s democracy. In his story, Rafiu shares his achievements, challenges and highlights why the Warsaw Declaration provides an essential framework to strengthen democracy.

“The Warsaw Declaration is an essential framework required for all youth to hold their government accountable and strengthen democratic principles and ideals” – Rafiu Adeniran Lawal, Nigeria.

I recall that on the 23rd of February 1996, my father returned home from work with his eyes swollen shut. He had been beaten on the street following a confrontation with soldiers on patrol.  During the non-democratic rule of about 30 years in my country, abuse of human rights and victimization of citizens was just one of the crimes associated with the military regime. Nigeria returned to a democratic system of government in 1999.  Still a teenager, I greatly rejoiced at this change because I understood what the lack of democracy meant for my family and neighbors: the possibility at any time to return home brutalized and harassed.  I hope my story illustrates why I value Principle 18 of the Warsaw Declaration: “That civilian, democratic control over the military be established and preserved.”

Despite moving along a democratic path, Nigeria’s political trajectory has still been marred by electoral violence, with youth often occupying the center stage, either as perpetrators or victims. In response, I founded a youth NGO, Building Blocks for Peace Foundation. The foundation has been helping to empower young people in political participation, accountable governance, peacebuilding, and sustainable development. Through this organization, we educate and train young people on civic responsibilities to ensure positive contributions to the electoral processes and to promote accountability.

As youth, our participation represents the building blocks on which democratic governments stand. To support this, world leaders need to increase investment in youth and youth initiatives, to meaningfully include them in local, national, regional, and international decision-making processes and to provide space to manifest their work.

Our most significant strength is the capacity to mobilize other vulnerable youth and communities towards a free, fair and peaceful election, a core democratic right and Principle One of the Warsaw Declaration. As outlined in the Warsaw Declaration, every person has the right to equal access to public service and to take part in the conduct of public affairs, directly or through freely chosen representatives.

In 2020, the Warsaw Declaration is an essential framework, a roadmap, for youth to hold government accountable and to strengthen democratic principles and ideals.