“There was a terrifying rumour that there was a death threat; indigenous people leaders have been killed. It has been frustrating because I’ve been discouraged as they think I will die. My mother told me to leave, to look for a good job, but my heart is always for the people in the community.”

Armed conflict has been part of the daily life of twenty-one-year-old Ricamae A. Ented, a young peace activist and human rights defender actively working on peacebuilding, nonpartisan electoral education, and advocating for women’s rights.

She belongs to the Teduray Tribe in the province of Maguindanao, located in the Bangsamoro Autonomous Region in Muslim Mindanao (BARMM), an autonomous region located in the southern Philippines. The BARMM was formally established as part of a peace agreement to end nearly five decades of conflict between the Philippine government and Moro secessionists.1https://www.usip.org/index.php/publications/2020/06/challenges-facing-philippines-bangsamoro-autonomous-region-one-year

“I commit to being a voice for fellow indigenous people. We have firsthand experience of armed conflict, so I was motivated to join peace initiatives. I am a member of Young Women+ Leaders for Peace – Philippines.”

“As an indigenous young woman, I have my own distinct identity, belief, practices, traditions, religion, and way of dressing. We have customary laws and indigenous structures. By 2030 I want my tribe to win the title for our ancestral domain and fully practice our tribal beliefs and traditions. That is my only dream.”

“Some of my childhood days were spent in the evacuation centres where I was able to talk to different NGOs when they conducted post-conflict programs and provided psycho-social support activities through peace camps and peace dialogues for youth from different tribes.”

Barangay Kuya in South Upi municipality is home to the Teduray Tribe, one of The Philippines’ most-known indigenous peoples. South Upi has vast lands of fertile soil, a home to healthy animals. Their primary livelihood is farming, and main source of power is solar energy. Conflict first erupted in Kuya in 2017. Families were forced to evacuate their homes, leaving their valuable solar-powered belongings and their livestock. These are prized possessions that took them years to acquire and develop and are crucial to their daily lives.

The Tedurays have been in and out of evacuation centers since then. While some chose to seek shelter from relatives in neighboring barangays or sitios (parts of barangays). Displacements are becoming more frequent. They evacuate at least twice every year; each time can last from days to a few months before they can return to their homes.2https://philippines.oxfam.org/latest/blogs/tedurays-quest-peace

As Ricamae joined college, participation in the non-governmental organization Institute for Autonomy and Governance (IAG) initiatives, particularly the Indigenous People Youth Congress, paved the way to extend her network with like-minded youth peacebuilders and indigenous leaders from across Mindanao Province. The IAG training connected her with Local Government Units, non-governmental and civil society organizations: “From there, I was motivated to continue with my advocacy for peace.” She was mindful that there were many indigenous people who did not have opportunities to speak out, and she has the trust of her community. “They are not educated enough, and so they are not able to present their issues and concerns. They are afraid to be misunderstood,” explains Ricamae.

A 2019 Peace Forum introduced Ricamae to the Global Network of Women Peacebuilders (GNWP) and Young Women+ Leaders for Peace – Philippines. Her participation in a training program on the United Nations Security Council Resolution 1325 (UNSCR 1325) connected her with local and international peacebuilding allies.

“In 2019, after I graduated from college, I faced the hardest time in my advocacy for peace journey. I was confused, and couldn’t earn a living. I’m a breadwinner for my family. I looked for a job in the cities, but my heart was at home. I went back home to implement simple peace initiatives that I can with the small amount of money that I have and with the support of the networks, especially the Young Women+ Leaders for Peace – Philippines and Mallika and Mavic from the GNWP. I need to be in those dialogues.”

While Ricamae’s mother was understandably concerned for her daughter’s life, especially after her husband was murdered in 2017, she remains supportive of her peacebuilding work, “[even though] it’s been tough financially, emotionally.”

These dialogues are ensuring her people are being heard by the local and national government and leaders: “The help coming our way is overwhelming. Although there is an ongoing armed conflict in the neighboring barangay,” she says, referring to the support from NGO and civil society organization networks as well as the Local Government Unit from the barangay level to the province of Maguindanao.

With all the commitments to women’s participation in peacebuilding, Ricamae believes that localization is critical. “UNSCR 1325 needs to be localized to reach the grassroots level where the injustices happen.” She adds that the best approach to localization is partnership and collaboration with local government, civil society, and NGOs as well as government agencies. “We need to have consultations. We need to listen to the communities. We need to listen to their stories. We need to let them be part of finding their solutions.”

That is what Ricamae is doing, especially when many of her community members have felt frustrated and lost trust in agencies; even though they have established projects and provide relief assistance, they have not sustained their peacebuilding efforts. Ricamae adds that trust-building is critical. She said, “We need to empower the community so that they can stand up on their own and manage their projects.” These projects would include sustainable livelihood and livestock farming projects. She notes the need to sustain the results; this would consist of providing literacy programs including financial literacy, as well as start-up capital to local women’s groups.

There is also a critical need to address the specific needs of young people whose future is being disrupted as a result of the impact of COVID-19 on education and seeking employment: “We have a huge number of young women who are out of school. And during this pandemic, in-school youth are planning to drop out because we do not have an internet signal in our community. They cannot ask for help from their mothers because they did not go to school; they cannot read and write. It is very challenging.”

“Information and communication campaigns on the prevention of violent extremism are vital for a young person at this time,” says Ricamae, particularly as the COVID-19 response is closely linked to peacebuilding. In this time of hopelessness, Ricamae says that youth empowerment and supporting their mental health is vital for sustaining peace and for preventing the escalation of violence: “Education can prevent their recruitment by extremist groups. They need to be motivated to stay in school. They need support and advice to make the right decisions.”

Explore more about the importance of involving women in peacebuilding in the Community of Democracies’ publication on “Engaging Women in Sustaining Peace: A Guide to Best Practices.” Based on desk research conducted on post-conflict countries across the world, the publication distils seven commitments outlined in this action plan and identifies good practices and lessons learned in engaging women in peacebuilding. 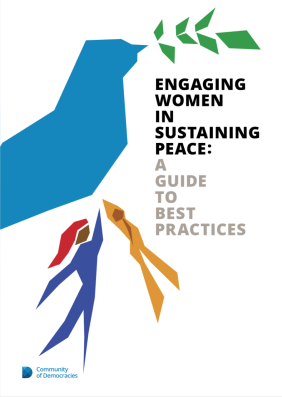