After months of pro-democracy protests in Hong Kong, in 2020, the Chinese government mandated a new law severely restricting the rights and liberties of Hong Kongers. Crackdowns have been fierce and arrests of pro-democracy figures widespread. Even as Covid-19 continues to disrupt travel, thousands of Hong Kongers are leaving for safe havens. We talked with Joey Siu, a policy advisor at Hong Kong Watch. The 22-year-old is a leading pro-democracy activist currently in exile in the United States.

While much of the globe has been focused on Covid-19, Siu explains that the situation in Hong Kong has been rapidly worsening over the past year, especially since passage of the National Security Law in 2020. “The situation is that the people of Hong Kong have had their freedom, democracy and fundamental human rights taken away… The story of what is happening in Hong Kong is a very clear reflection of the Chinese Communist Party’s very aggressive expansion and ambition to expand their influence around the world… And, because of the Chinese Communist Party’s suppression, a lot of people are leaving Hong Kong out of fear.”

Hong Kong’s protests ignited in June 2019 against plans to allow extradition to mainland China, which critics feared would undermine judicial independence and endanger dissidents in Hong Kong. The initial bill was withdrawn in September 2019, but demonstrations continued with thousands protesting daily in opposition to the extradition law, but also demanding full democracy and an inquiry into police actions.

In July 2020, the Beijing government decided to pass the National Security Law. As Siu says, the law “targets every single pro-democracy protester, politician, activist, or anyone willing to stand up against the Chinese regime and condemn the Beijing government for its human rights violations.” Since that time, nearly all the city’s leading pro-democracy figures, including activists and politicians, have either been jailed or forced into exile. This crackdown has led to over 117 people arrested under the security law and 64 charged as of June 27. Clashes have become increasingly violent, with police firing live bullets and protesters attacking officers and throwing petrol bombs.

Further, according to Siu, “the government has taken further steps to crack down on freedom of speech, freedom of expression, and press freedom.” Several members of Next Media Group were charged, leading to the shutdown of Apple Daily, the mainstream pro-democracy media outlet in Hong Kong, stifling news and dissent. 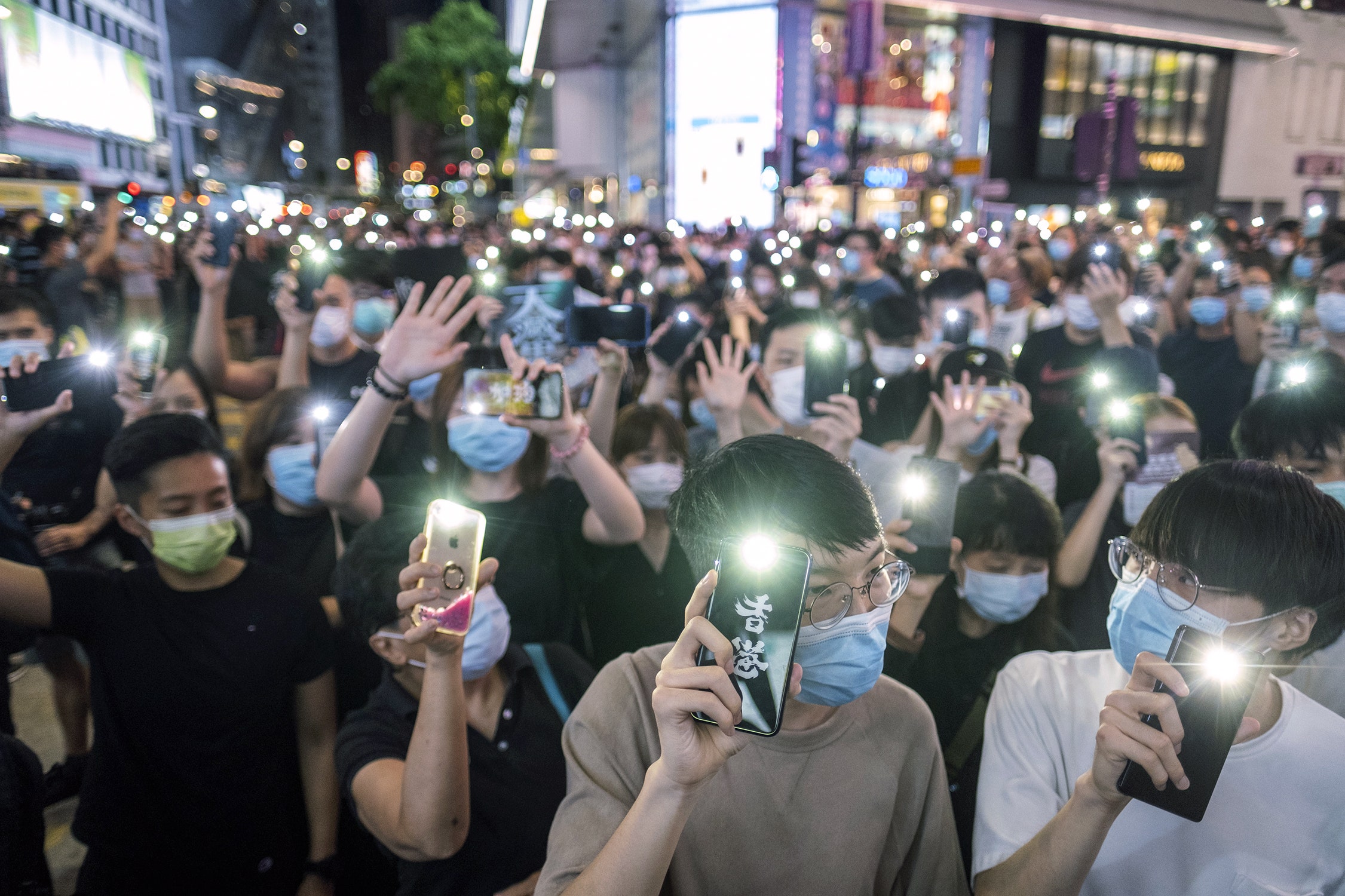 Siu talked about strategies to fight back and hold the government of Hong Kong accountable: “It is important… that the international community step up and form a coordinated policy that includes economic sanctions and legislation that prevents infiltration from China… For the international community, it is not just that assistance to the people of Hong Kong but a defense of our shared values.”

As Siu explained, “To achieve that goal, we are mobilizing not just Hong Kongers, but also building alliances with others who are also under pressure from the Chinese Communist Party, such as the Uyghurs, Tibetans, outer Mongolians, Taiwanese brothers and sisters, and with other allies. We have been organizing grassroots campaigns, protests, rallies everywhere. We have also been working on policy advocacy, talking to parliamentarians and government officials to raise their awareness about the expansive ambition of the Chinese Communist Party (CCP).” The pro-democracy forces have kept up the public pressure, organizing several large-scale rallies worldwide and advocating for legislation to defend shared values.

One of the largest challenges for Siu and others has been explaining to the international community why some pro-democracy protestors have resorted to violence: “Whenever we get asked this… it gives us a chance to constantly reflect on our tactics and methods. It is also important that we advocate for peaceful, non-violent solutions. For example, the Chinese Communist Party has made it hard for people to protest peacefully. They cannot vote to elect their next leaders, they cannot protest, cannot say anything that goes against the CCP. We try to understand the violent tactics and reflect on ourselves. Are those of us who are privileged enough to live in a free society – are we doing enough to help these people protest peacefully? Are we doing enough to encourage our government to provide assistance – not only to protect them but to advance our shared values?”

The protestors are from every walk of life, and every age group in Hong Kong, although many are students. Besides those on the front lines and political leaders, according to Siu, there have been many others supporting the protests behind the scenes, including “business leaders [who have provided space and funds to the protestors], social workers volunteering to take care of young protestors who have been kicked out of their families, [as well as] a lot of women have organized resources to take care of young protestors… on the front lines.” Further, women leaders outside Hong Kong have also taken the lead in “defending rights and freedoms for the people of Hong Kong.”

As a young woman activist, Siu sometimes gets looked down on and underestimated. As she says, “these biases and micro-discriminations as a young woman allow me to reflect on myself and be in others’ shoes… who understands how it feels to be discriminated against because of your gender and your age. Having this experience when organizing campaigns, I try my best to make sure that every co-worker has equal opportunity and expectations, and no one will be looked down on because of gender, age, race or background.” This has also affected how she responds to crises because she now “pays extra attention to women victims of the crisis or incidents… As a female leader, I can understand better these experiences.” 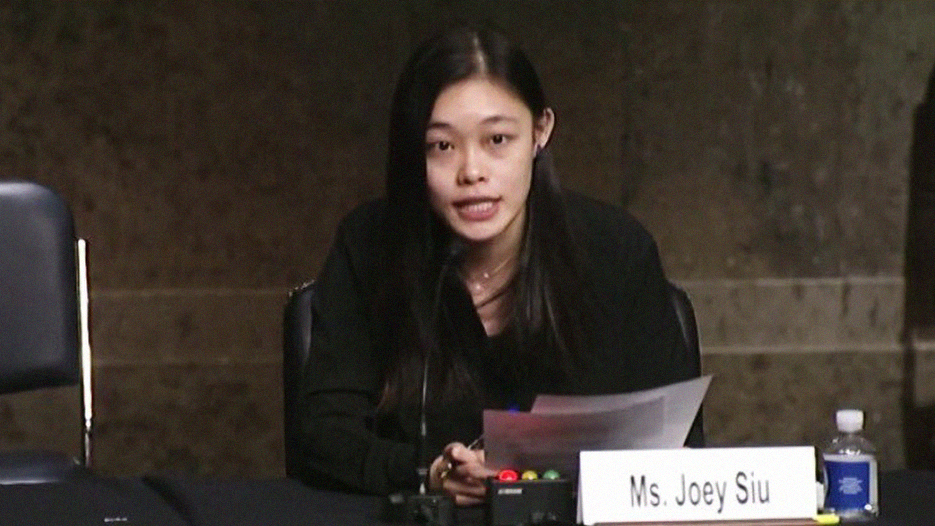 Looking into the Future

According to Siu, what’s happening in Hong Kong is “the canary in the coal mine” because this is symptomatic of the CCP’s global ambitions to build a different international order with no human rights. “What is happening in Hong Kong could be happening anywhere and that is an important lesson for countries in the free world and for every individual living in the free world.” She sees the Hong Kong experience as a tool to “teach people about what can happen and about how fragile our democracy and shared values can be” so it is crucial to defend and protect them.